Arrangement of the Fondo Culto

Thanks to the financing of a research on the papers of the Baron Carlo Monti (General Director of the Culto Fond from 1908 to 1923), the Archives managed to embark also on the arrangement of the entire fond.

The Baron Carlo Monti (1851-1924), studied at the National College and then at the State University of Genoa together with Giacomo Della Chiesa, the future Pope Benedict XV. In 1882, Monti was employed at the Fondo per il Culto, an institute created by the law for the abolition of the religious associations and depending on the Ministry of Mercy and Justice and Cults of the Italian State. In 1908, he becomes the General Director. In 1914, when Giacomo Della Chiesa is elected Pope with the name of Benedict XV, he chooses his old school friend as «his confidential intermediary» for the relations with the Italian State in the pre-Concordat epoch. The State Official pays visits to the Pontiff and his Secretary of State (Cardinal Pietro Gasparri) twice a month to talk about all the topics of common interest. During the seven years of the papacy, the Pope gives audience to Monti for as many as 175 times.

In November 1924, by the good offices of the Jesuit Father Pietro Tacchi Venturi, the Holy See bought for sixty-thousand liras, the Diario and the Archive of the deceased Baron Carlo Monti from the widow, the Baroness Maria Lucchesi.

The Baron’s Diario was made up of three large files, nowadays kept in the Historical Archive of the Second Section of the Secretariat of State (formerly of the Special Ecclesiastic Affairs).

The Archive is made up of 985 positions divided into four series: «SS» (Santa Sede = Holy See); «E» (Esteri = foreign); «C.P. Ris» (Corrispondenza Privata riservata = reserved private correspondence) and «C.P.» (Carteggio Particolare = private correspondence) for the years 1910-1924. The first series includes the correspondence between the Baron and the Secretariat of State; the second series contains the correspondence with the Ministry of Foreign Affairs; the third and the fourth series include private correspondence. In addition to these positions, there are four envelopes divided according to the protocol order for the last years of Monti’s life (1922-1924). As well as the positions, there are three day-to-day registers of the «corrispondenza riservata all’Illustrissimo Signor Direttore Generale e riguardante i rapporti tra il Regio Governo e la Santa Sede durante la Guerra» (correspondence reserved to the Most Illustrious General Director and regarding the relations between the Royal Government and the Holy See during the War); the sixteen registers on the missing persons of World War I, from June 1914 to November 1918; the two registers on the Vatican’s Relief Mission in Moscow between 1922 and 1923; the registers of the attendances in the Office; the over twenty files with the lists of the prisoners written by the nuns of various religious orders in Rome. 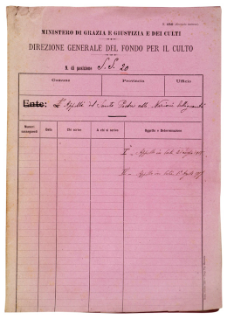 ASV, Fondo Culto 164
Register of the Orphanages helped by the Vatican’s relief mission in Moscow 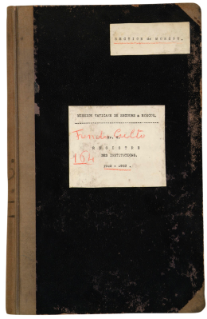 ASV, Fondo Culto, Santa Sede, position 20
On Benedict XV’s appeals for peace to the belligerent Nations of World War I

The papers of the «Archivio Monti» are of great interest to understand the «informal» relations between the Holy See and the Italian Government before the Lateran Agreements. The close ties between Monti and Orlando on one hand, and his role as friend and confidant of Pope Benedict XV on the other, allowed him to be a highly privileged source between the two riverbanks of the Tiber.

The neutral role played by the Pontiff during World War I, his commitment for peace, the incessant intense activity for the war prisoners, notwithstanding and against the interests of the Italian Chief of Staff, the information of the belligerents of both parties at odds, are all aspects of the Great War that appear firsthand, in their dramatic contemporaneousness, in the greatness of the people involved, after reading through the papers of the fond. The Roman Issue comes alongside with the War, with the premonitory signs of its resolution. But even after the death of Benedict XV, the archive is still of great importance: just think of the registers on the Vatican’s relief mission in Russia hit by the famine.