With the contribution of the «Fondazione Marco Besso»

Thanks to the contribution of the Foundation Marco Besso, in November 2009 the Archivio Segreto Vaticano started arranging the Fond Carte Kanzler - Vannutelli.

The Fond Carte Kanzler - Vannutelli (originally 90 archive items covering the years between 1824-1906), includes a series of documents that belonged to the last commander of the papal army and Arms Pro-Minster of Pope Pius IX, the German General Hermann Kanzler (1822-1888), as well the letters and the diaries of his brother-in-law, the Dominican Friar Vincenzo Vannutelli († 1900), cousin of the better-known cardinal and unique religious personage, military chaplain and protagonist, after 1870, of the religious movement towards the Christian East which, in the second half of the 19th century, took the name of ‘Unionism’.

The fond does not constitute the General’s entire «archivio personale», which probably lost some of its important items that ended up in the book-antiques market, but it definitely has the great majority of the papers and its interest is quite evident.

The Fond underwent a perfunctory arrangement after it was transferred to the Vatican Archives (1931 and 1937), during the long Prefecture of Mons. Angelo Mercati (1925 - 1955), and separated into two series. 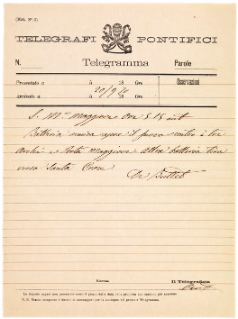 The first series, called «Carte Kanzler - Vannutelli, A», originally consisted of about 75 archival items (including registers, volumes, address books and boxes of loose documents), probably belonging to the transfer made in 1931. It contains many documents regarding the orders of the day, reports, letters, memoirs, telegrams, for events involving the participation of the papal army between 1867 and 1870 (from «Mentana to Porta Pia»); as well as previous documents (starting from 1831) always of military nature and after 1870.

The second series, called «Carte Kanzler - Vannutelli, B», is kept in 15 envelopes (boxes of loose letters) and it is probably the part acquired in 1937. This constutes the real «archivio privato» of the Kanzler - Vannutelli family, including the private letters of not just the general and his wife Laura Vannutelli, but also of their ancestors, covering a period that goes from 1824 to 1906. One last part of the documentation includes the personal papers of the Dominican Friar Vincenzo Vannutelli: not only his correspondence with the most important personages of the dialogue with the Christian East of the last quarter of the 19th century, but also his handwritten diary and his spiritual writings.

The project funded by the Foundation Marco Besso includes the re-arrangement and the analytic arrangement of the entire archival fond. The respective volume is expected to be published on the hundred and fiftieth anniversary of the Unity of Italy (in 2011).