with the contribution of the «Fondazione Marco Besso»

The Della Valle family, probably originally came from Spain (but with ramifications also in the Kingdom of Naples, in France and in Piedmont), were present in Rome since the 12th century, but under the papacy of Martin V the family gained a high-ranking role in the political life of the city and in the Curia. Paolo della Valle becomes archiater of Pope Colonna, and in 1418, “Cancelliere Perpetuo” and “Conservatore di Roma”. The strong ties which from then on will always link the Della Valle to the very powerful baronial family and to the papal curia date back to those days.

In the Modern Age, the family owes its fortune to the merits of Cardinal Andrea (1463-1534), protected and with many benefits received from the reigning popes (under Clement VII and after the Sack of Rome held the important office of Governor of Roma). In fact, it was the latter who left in the Eternal City the important testimonies of his family, both through the order to build the tomb of his father Filippo (died in 1494) in the Basilica of S. Maria Aracoeli, and the building of the new family palace on today’s Corso Vittorio (which then became Palazzo Della Valle-Rustici-Del Bufalo), after the destruction of the previous one in 1484, because of the internal wars between the Orsini and the Colonna families. The first three bundles of the Archive still contain the bills and receipts of these works and of the three firms the cardinal set up for his brothers and the paternal family.

The archival fond unfolds itself extensively covering the 16th,17th, 18th centuries and the second half of the 19th century, preserving - especially for the late Middle Ages and the early Modern Age - important testimonies about the acquisition of the family’s land and estate patrimony, as well as the precious historical, literary or memorial documentations of the most illustrious members of Della Valle family, such as for instance Berardino, a man of letters and politician (1450-1505) friend of Poliziano and of the King of Naples, protagonist of the tensions in Italy towards the end of the 15th century; Lelio, humanist and jurist (1400-1476) friend of Pomponio Leto and member of the «Accademia Romana»; and finally Pietro called «il Pellegrino», an eclectic character, orientalist, musicologist and traveller (1586-1652). 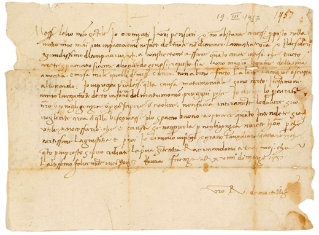 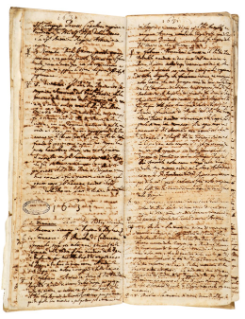 The modern part of the archive is relevant to the patrician family Del Bufalo, who originally came from Pistoia and settled in Rome towards the end of the 15th century. Innocenzo Del Bufalo was nominated Cardinal by Clement VIII in June 1604. The two family branches, maternally linked to the Rustici family (Brigida de’ Rustici married Lelio della Valle, who died in 1476), became one at the beginning of the 18th century, when Romibera Della Valle, the daughter of Pietro «il Pellegrino» married the Marquis Ottavio del Bufalo Cancellieri.

One last section of the Archive, has some documents regarding the activities of don Giuseppe Montoya, chargé d’affaires of Mexico to the Holy See between 1840 and 1853, whose daughter Anna Luisa married the Marquis Pio del Bufalo della Valle, great-uncle of the famous Luigi Rivera who, as we said before, donated the Archive to the Holy See.

Thanks to the contribution of the Fondazione Marco Besso, the archive was indexed and now has an analytical tool for consultation, published in Collectanea Archivi Vaticani.