Arrangement of the fond archivio della nunziatura apostolica in Torino

with the contribution of the «Compagnia di San Paolo»

The Popes have always had the independent right to appoint and send his representatives, both to particular Churches in various countries and to States and Public Authorities. Starting from the 16th century, the representation to the state authority was consolidated, through permanently established legations, called apostolic nunciatures. The documents found in the fond are the result of the many activities (diplomatic and administrative, judiciary, fiscal-economical) of the permanent nunciature to the Dukes of Savoy, officially founded by Pius IV on 1560 July 1 in the person of Francesco Bachaud (1650-1573), Bishop of Geneva, even though papal representatives were already accredited to that Court since the beginning of the 16th century.

Established in coincidence with the conclusive works of the Council of Trent, to immediately ensure the presence of Piedmontese bishops at the assembly, its main aim was the safeguard of that delicate geographical area - along the border with protestant States, whose dioceses already felt a strong «Gallican» imprint - from the heterodox contaminations (especially Calvinists and Waldenses) and at the same time the assertion of the jurisdictional rights of the Church within the Savoyard duchy.

The last nuncio left Turin in April 1850. From 1856 and up to 1891, the Holy See no longer accredited any of its representatives. Mons. Gaetano Tortone remained «at the service of the Holy See in Turin» with no diplomatic role, who died in 1891. The following year the archive of the nunciature was transferred to the Vatican.

The Archive is currently divided into two sections:

A) “Feudi del Piemonte”, with a perfunctory inventory (ASV, Indice 1141), including about 250 archival items mainly relating to the Nuncio’s ecclesiastic-diplomatic activities (Secretariat): correspondence between the papal representatives and the Secretariat of State and various bodies of the Curia (Congregations) and various local offices of the Papal State (other Nunciatures, Papal Consulates, Governors of the State of the Church or of the feuds of Masserano, Tigliole, etc. 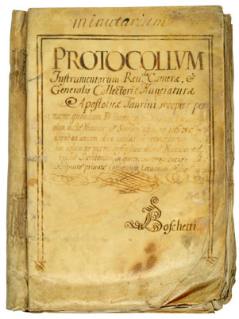 Protocol of the Nunciature’s collectorship 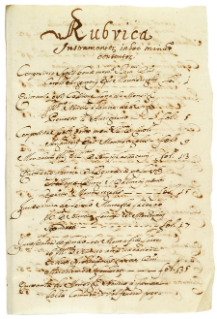 already subject to the Holy See, documents about apostolic visits and letters to Piedmontese bishops). This section includes legal proceedings coming from the courts of the governors of the same Piedmontese feuds and from the Court of the Nunciature. These judicial acts have now been included into the series of the archive of the Court of the Nunciature. To facilitate researchers, these items will keep the marks of the previous archive reference numbers found in Indice 1141.
B] The Proceedings of the Court of the Nunciature (in course of arrangement), consist of:
- about 2300 trial files (1560-1753), organized into Acta diversa, Acta appellationis, Acta procuratoris Camerae Apostolicae, Acta Criminalia, Acta Spolii, Informationes, proceedings from other lay and ecclesiastic courts of the Duchy of Savoy merged into the archive of the Court for various reasons (avocation of the trials by the nuncio, appeals to the Court of the Nunciature for disputes in second or third instance, proceedings merged fortuitously or for reasons unrelated to legal procedures, such as for instance the inquisitorial trial held in 1560 by the Inquisitor Giacomo de Barilis di Collegno and by the judges of the district of Vercelli Francesco Odeso di Crescentino against Elena di Montonero, know as del Cara, widow of Bartolomeo Ferrari, charged with heresy and witchcraft). The card indexing of these series has been concluded. It is now in course of general review;
- about 240 registers containing trials, sentences of the Court of the Nunciature, decrees of the Nuncio, various notary deeds, documents of financial nature, consequence of the Nuncio of Savoy’s activity as apostolic collector, delegated to collect tithes or other ecclesial taxes laid on secular and regular religious people and above all to reduce the Treasury of the properties that no longer belonged to the religious people (confiscation of vacant profits and the incomes of beneficiaries deriving from the administration of the benefit they had been granted). Among the registers, there are also volumes from other secular and ecclesiastic archives, which for various reasons were merged into the Archives of the Nuncio (such as the «Registro delle cause et altre spedizioni della segreteria del Senato di Torino», which contains proceedings between 1628 February 21 and December 29); volumes regarding bishoprics and abbeys (also registers of the proceedings of the Court and the Refectory of the Archbishopric of Turin are kept here). The perfunctory arrangement of the registers has now been finished; the foliation and the general review of the single items is under way;
- materials of different nature from the court: testimonials, informationes, pleas to the Nuncio, fragments of legal proceedings, minutes of sentences, accounting documents of various bishoprics or minor benefits (not arranged yet, quantifiable in about 10-15 linear metres of boxes full of loose papers);
- various correspondence of the apostolic nuncio with the Secretariat of State, various particular bodies of the Curia (17th-19th centuries), quantifiable in about 4-6 linear metres; this material was part of the section regarding the Nuncio’s «segreteria» (formerly “Feudi del Piemonte”). The arrangement of this correspondence includes a semi-analytic indexing of the single items.

The card-indexing of the documentary material was preceded by a general review of the items, lacking of any form of logical order, and by the reorganization of the archival series suggested by the documentation itself. The inventory contains, for each file or register or envelope, the following data: chronological information on the item; the original title; brief summary of the item; external description; dimensions, previous archival reference numbers, notes on the back, the presence of seals, the consistency of the folios according to a new numeration.
The general work of analytic arrangement of the fond, funded by the «Compagnia di San Paolo» was started in Spring 2004. At its conclusion, the first analytic inventory of the fond will be published in electronic format and in hardcopy.