The Central Papal Commission for Religious Works of Art in Italy was established by Pope Pius XI on 1924 September 1 as an advisory and executive agency with the memorandum n. 34215 of the Secretariat of State, which represents its actual statutory document. One of its main aims was to protect and foster religious works of art.

After the destructions of World War II, that made «victims» also among many outstanding religious monuments in Italy, the Papal Commission restored and rebuilt the churches and the ecclesiastic buildings that had been damaged or destroyed: the Archival Group Archivio Campane referred to this historical period, is a witness of the tragic destructions of the Germans and the bombings of the Allied forces, as well as the requisitions of thousands of bells carried out by the Fascist Government first and then by the Nazi Army during the war. At the end of the war, the Italian State was the only country in Europe that had made the effort to finance the restoration of all the bells that had been destroyed or requisitioned.

The post-war reconstruction and the subsequent social and demographic phenomena linked to the industrial development of the Country and its urbanization urged the Italian bishops’ pastoral need to build more parishes than they had ever done in the past. This greatly encouraged the diocese Ordinaries who worked very hard and put a great effort into covering the Country with a new “mantle of churches”.

The Italian State responded to this need with a synergic action that turned out to be instrumental. Two laws issued at a distance of ten years between one and the other, Law n. 2522 of 1952 and Law n. 168 of 1962, provided for separate State actions: the first one, granted Ordinaries the money to buy the land and build the rustic structures. The Law 168 of 1962, which modified also the previous one, instead allocated a continued financial contribution over 35 years equal to 4% of the total cost for building or for completing parish churches, canonical homes or other constructions for the pastoral ministry. The Central Papal Commission had the duty to approve the projects submitted by bishops in compliance with the liturgical precepts and of sacred art, which with the Vatican Council II would have enjoyed a new flourishing season.

Between 1952 and 1990, when the Commission came to an end, thousands of projects were sent to the Palazzo of the Chancery - the seat of this body - from all the dioceses of Italy.

The first one, in course of arrangement, includes the entire range of the Commission’s activities and it is the richest and most heterogeneous group for the typology of its documentation. It worthy to note that this group withholds a photographic patrimony of exceptional value, unique of its kind: thousands of photographs of sacred art coming from the Alinari, Anderson and other archives, which document the huge Italian artistic patrimony.

The Archivio Campane, which we already mentioned, consists of 288 envelopes equal to 8735 files. Of the envelopes, 280 correspond to each diocese, whereas the remaining 8 contain general papers, administrative documents, the lists of the bell fusions and of the reimbursements. In the envelopes for each diocese it is possible to find, together with the general papers and - where available - those concerning the reimbursements, files called “Modulo A” and “Modulo B” regarding the fusion or the return of the bells belonging to a specific church.

The archival groups Capo I and Capo II, are called like this because they refer to the subdivision of the Law 168 of 1962; Capo I, which with some amendments followed the Law 2522 of 1952, and Capo II, 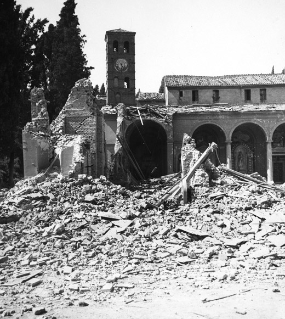 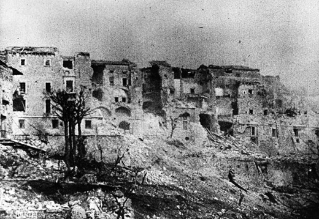 Picture of the Abbey of Montecassino after the bombings (february 1944, LUCE pictures)
ASV, Commissione Centrale Arte Sacra in Italia, A. G., in course of arrangement 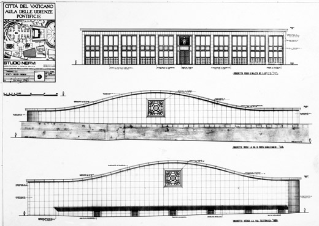 Picture of the Project of the Hall of the Papal Audiences in the Vatican (Pier Luigi Nervi)
ASV, Commissione Centrale Arte Sacra in Italia, A. G., in course of arrangement

The envelopes of these two archival groups mainly contain the same types of documents: letters by Ordinaries or diocese offices, drafts of the Central Commission, documents coming from the Ministry of Public Works and the Ministry of the Interior, less frequently from the Local Offices of the Civil Engineers or the Superintendence Agencies, and attached to it you will find the project of the construction to be built - often signed by illustrious and famous architects of the 20th century - which in turn includes drawings, reports and other technical works. Often, in addition to the project, there are photographs of the area where the building will stand and of its plastic model. In order to protect this photographic material, it has been put into special envelopes. Sometimes, it is possible to find letters that the above-mentioned protagonists exchanged between each other either before or after submitting or examining a project, mainly relevant to the administrative procedure.

As we wait for the final card index, starting from mid October 2009, scholars can consult the “Temporary Card Index” (“Inventario provvisorio”) in the Card Index Room of the Archives. This inventory, in 9 volumes, regards the series Archivio Campane, Capo I, and Capo II and it includes an Index of the places (dioceses, towns and ecclesiastic buildings), as well as an Index of the names of the designers and of the foundry firms.