The Istituto Storico Germanico in Rome and the Kommission für Zeitgeschichte in Bonn have begun the publication of the reports of the Nuncio in Berlin, Cesare Orsenigo, from 1930 up to the end of the papacy of Pius XI, along with some other documents of the Secretariat of State.
They include about 700 reports and 200 additional documents.
The Archivio Segreto Vaticano patronage and collaborate directly with the initiative by offering for free the digitalisation of all the documents on CD Rom.

Cesare Orsenigo, born at Olginate in the province of Milan in 1873, nominated Archbishop of Tolemaide was Internuncio in Holland in 1922, then Nuncio in Hungary in 1925. On 1930 February 14 he was nominated nuncio in Germany, immediate successor of Eugenio Pacelli, who became Cardinal and Secretary of State. He was Nuncio in Berlin in the years of Hitlerian Germany and of World War II.
He died at Eichstatt on 1946 April 1. 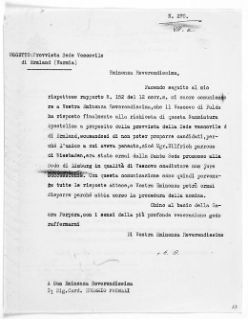