On the initiative of the Professors Hubert Wolf, Director of Seminar für Mittlere und Neuere Kirchengeschichte of the Westfälische Wilhelms-Universität in Münster, and Michael Matheus, Director of the Deutsche Historisches Institut in Rome, in 2004 the preliminary census of the necessary documentation was started to prepare a critical edition of the dispatches sent to the Secretariat of State by Eugenio Pacelli during his appointments as Apostolic Nuncio to Munich (1917-1924) and then to Berlin (1925-1929).
Thanks also to the collaboration immediately offered in person by the Prefect of the Archivio Segreto Vaticano, which allowed to digitize the documents with financial facilitations, at the end of 2007 this project obtained the approval and a first three-year funding (renewable until 2019, the deadline set for the conclusion of the work) by the Deutsche Forschungsgemeinschaft, which allowed to officially start the work in January 2008.

To date, all the dispatches of 1971 have been entirely transcribed and from March 2010 it will be possible to consult them online, on the following website www.pacelli-edition.de: an innovative graphic system has been designed for this special occasion, which will allow to compare the first draft of the reports with the final version, thus allowing to appreciate the corrections and changes gradually made to the texts. 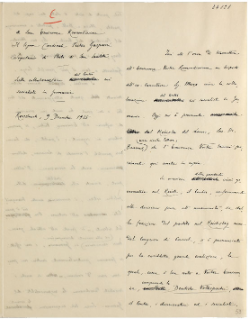