in collaboration with Scrinium

The Exemplaria Praetiosa have breathed life into ancient art treasures of immense cultural importance preserved in the Archivio Segreto Vaticano and released them from this repository of humanity to travel all over the world. It is a unique, limited collection of rare documents presented in superb quality facsimiles created by skilled craftspeople.
www.exemplariapraetiosa.com

On the occasion of the 50th anniversary of the opening of the II Vatican Council, the Vatican Secret Archives and Scrinium present the perfect replica of the historical papal Bull (mm. 285×400) with autograph of the Blessed John XXIII and subscriptions of 61 cardinals.

The highly evocative and solemn parchment document, drawn up in exquisite calligraphy and endorsed with the lead seal of Pope John XXIII, announced a memorable event in the history of all humankind (25th December 1961).

Working on the several rough copies recovered among the archival papers, H.E. Monsignor Pagano, Prefect of the Secret Archives of the Vatican and author of the commentary volume of Exemplaria V, has gone over the elaborate drafting process of the papal Bull and has accounted for all the repeated variations on the preparatory writings preceding the final version and the amendments made by Pope John XXIII.

The precious commentary volume offers historical sketches of the subscribing cardinals with their biography, photo and coat of arms, along with an exhaustive chronology, facts and figures of the Council. 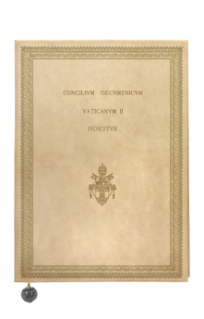 THE LETTER FROM THE LORDS OF ENGLAND TO CLEMENT VII REQUESTING THE ANNULMENT OF THE MARRIAGE BETWEEN
HENRY VIII AND CATHERINE OF ARAGON
The Archivio Segreto Vaticano and Scrinium present the faithful facsimile of the solemn document sent by the Lords of England to Clement VII (July 13, 1530) that has been housed in the papal archives for almost five hundred years.
The letter is very large (91.5 x 46 cm) and bears 83 signatures arranged in 13 columns on the fold of the letter created by a red silk ribbon attached to 81 pending seals in tin skippets and 4 empty skippets.
The facsimile comes with an elegant volume providing explanations of the reproduced document and the features of the noteworthy set of seals that make it so unique.

The first part of the volume contains a broad historical introduction, a general timeline of Henry VIII’s reign, plus a glossary explaining the technical terms and a summary of some particularly important events.
It then describes the events leading Henry VIII to set out on the long and arduous path to annul his marriage, and illustrates the complicated stages of the drawing up of the letter from the Lords of England to Clement VII.
The transcription and document summary are presented and the text of the letter is followed by an appendix providing a short biography of each signatory.
The entire work is embellished with images some of which come from the most prestigious British collections.
The second part of the volume is devoted to the sigillographic study.
It provides a historical introduction with considerations on the technology of sphragistics as well as an accurate description and life-sized image of the 81 seals and 4 empty skippets.
A heraldic glossary and a description of the blazons complete the volume.
Limited bilingual edition in Italian and English: 200 exemplars + XXXVI. 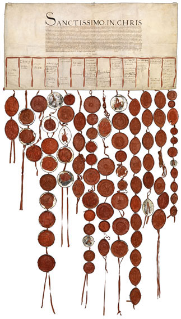 THE FIRST CRITICAL EDITION OF THE TRIAL AGAINST THE TEMPLARS FROM THE ORIGINAL DOCUMENTS OF THE ARCHIVIO SEGRETO VATICANO
The Archivio Segreto Vaticano together with Scrinium present the proceedings of the trail against the Templars (June 28, 1308 ~ 1311) in facsimiles of the original documents in the same Vatican Archives.
The facsimiles come with an elegant volume presenting a critical edition of the transcription of the proceedings of the trial for the first time (the old transcription by Schottmüller dates back to 1887).
It is an important historical and artistic initiative for lovers of rare and priceless documents
Limited edition of 799 exemplars. 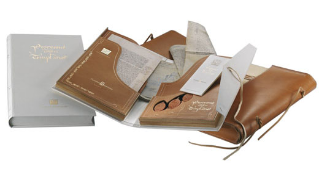 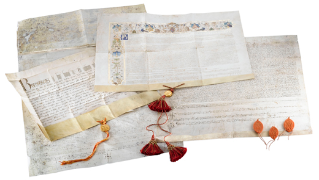 It is a reproduction of the elegant document by means of which the Doge of Venice Pasquale Cicogna (1585-1595) donated the palace belonging to the Gritti family to Pope Sixtus V.
The palace then became the residence of papal nuncios in Venice.
The parchment (486 x 688 mm) is embellished with gold leaf and polychrome illuminations of the Virtues.
The Doge’s seal is crafted in hand patinated gold (title 999.9%), attached to a silk ribbon (red and gold) with two elaborate handmade tassels at the end.
The case is in leather and calf leather bindings and has elegant inlay work on the spine.
This beautiful case contains the facsimile of the document and an explanatory volume (with the edition of the same document and its historical background) in kidskin parchment binding with the customary ties used for ancient documents. 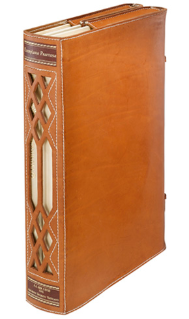 It is a facsimile of the bull of the first Jubilee of history (Boniface VIII, year 1300) and the bull of the latest Jubilee (John Paul II, year 2000). It is made in parchment and paper and bears the gold seals (title 750%) of the pontiffs.
A volume containing the critical edition of the two texts is provided.
Limited edition of 2,000 exemplars. 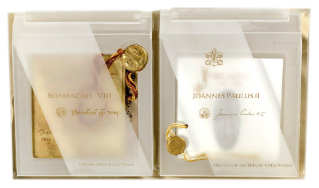